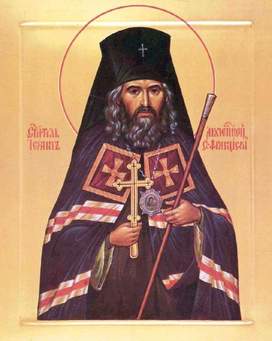 Saint of the Month

St. John the Wonderworker
Born  June 4, 1896
He was a pastor and spiritual father of high reputation and a reputed wonderworker to whom was attributed great powers of prophecy, clairvoyance and healing, and he is often referred to simply as “St. John the Wonderworker”. St. John was born Mikhail Borisovich Maximovitch in present-day southern Ukraine. In 1926 he was ordained a hierodeacon and given the name of John after his saintly relative, St John of Tobolsk. Later that same year, he was ordained to the priesthood and in 1934 he was ordained and assigned to the diocese of Shanghai. In 1951 John was assigned to the archdiocese of Western Europe. Thanks to his work in collecting lives of saints, a great many pre-Schism Western saints became known in Orthodoxy and continue to be venerated to this day. In 1962 John was once again reassigned by the Holy Synod to the see of San Francisco. On July 2, 1966, St. John died while visiting Seattle. His feast day is celebrated on the Saturday nearest to July 2.
Excerpts from:
http://en.wikipedia.org/wiki/John_of_Shanghai_an d_San_Francisco

The hymns for their Feast speak of Sts Peter and Paul as leaders, and chiefs of the Apostles. They are, without a doubt, the foremost in the ranks of the Apostles.
St Peter, the brother of St Andrew, was a fisherman on the sea of Galilee. He, with James and John, witnessed the most important miracles of the Savior’s earthly life. Despite his earlier recognition of Christ as the Son of God, he denied Him three times on the night before the Crucifixion. Therefore, after His Resurrection, the Lord asked Peter three times if he loved Him. Then He told Peter to feed His sheep. (John 21:15-17). After the descent of the Holy Spirit at Pentecost, St Peter addressed the crowd (Acts 2:14), and performed many miracles in Christ’s name. St Peter also traveled to many places in order to proclaim the Gospel message. He wrote two Epistles, which are part of the New Testament. St Peter was put to death in Rome during the reign of Nero

.
St Paul was of the tribe of Benjamin, and lived in Tarsus in Cilicia. He once described himself as a Hebrew, an Israelite of the seed of Abraham (2 Cor. 11:22). He was also a Pharisee and a tent-maker (Acts 18:3) who had studied the Law with Gamaliel at Jerusalem. At first, he was called Saul, and had persecuted the Church. He was present at the stoning of St Stephen (Acts 7: 58). Then, on the road to Damascus, he was converted when Christ appeared to him. Blinded by the vision, he was healed when Ananias laid his hands on him. After his cure, he was baptized (Acts 9:18). St Paul preached the Gospel in Greece, Asia Minor, and in Rome, and wrote fourteen Epistles. Tradition says that he was martyred in Rome about the year 68.  http://oca.org/saints/all-lives/2013/06/29

Venerable Macarius’ Miracle of the Moose

During the invasion of Russia by the Khan Olug Moxammat of Kazan in 1439, Zheltovodsky (Yellow Lake) Monastery of Holy Trinity was destroyed. Venerable Macarius, the founder of the monastery, was taken prisoner along with a few other survivors. After meeting with Macarius, the khan was so impressed by the nonagenarian abbot’s piety and love of his neighbor, that he released him and his disciples, on the condition that they leave the Yellow Lake site.
The Yellow Lake (which was located at the fall of the Kerzhenets into the Volga) being too perilously close to the invasion route taken by the Kazan Khanate armies invading Russian principalities and vice versa, the released survivors decided to relocate a few hundred kilometers to the north, into the fastness of the Galich forests, which are located along the Unzha River in what today is Kostroma Oblast. Taking the easy route along the Volga would not be a safe thing to do in this year of war; so the Saint and his followers choose to travel through the dense woodlands and swamps of the Kerzhenets basin — the land which is even today is almost deserted by people.
After a few days of travel, the monks ran out of food. One day they somehow managed to capture a moose . . . . . .  read more in the newsletter.

Who Do You Trust?

Fr. Andrew
Trust is one of the most precious gifts we can give to each other. It is the very foundation of solid marriages and deep friendships. When trust is fractured and begins to be lost, everything becomes shaky and uncertain, we feel lost and betrayed and flounder like a rudderless ship. This is especially true when it comes to our trust and faith in God. Throughout the scriptures we are called to trust in God, for He alone is always trustworthy. He alone perfectly knows and loves us and desires to bring us into true communion and transformation through Christ. As we come to know God and to trust Him with every fibre of our lives, we slowly grow in our ability to truly trust that all things are working out for our good. This in turn gives us the ability, when those we love and trust behave badly, to still be able to maintain our trust that God is faithful, and forgive and hold our hearts open.

It is important that we choose carefully where we put our trust. Today’s advertising culture, and all of mankind’s history is littered with people who have made it their mission to win our trust that they might benefit themselves. The entire goal of the multi-billion dollar advertising industry is to win our trust and secure brand loyalty to build their sales. Often any type of manipulation or half truth is considered to be acceptable, as long as it drives sales. We are inundated with self-proclaimed “experts” in every field who assure us that they are indeed trustworthy and if we just “trust” them and buy their recommended product or follow their plan, our lives too can be as wonderful as theirs. It is even considered fair game to choose well known celebrities to promote any given product or brand, as after all wouldn’t we like to be like them? I mean if you can’t trust Dr. Oz or Oprah who can you trust?