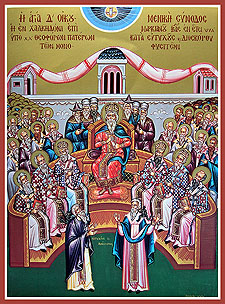 Today is the 4th Sunday after Pentecost and today we celebrate the Fathers of the first 6Ecumenical councils. It is a very ancient commemoration which doesn’t include the 7th Ecumenical council – the council of councils – simply because it was instituted before the 787 date of the 7th council. The full and complete humanity, and the full and complete divinity of Christ was carefully defined, as was the doctrine of the Holy Trinity during these foundational councils. We remember this every time we cross ourselves, Father, Son and Holy Spirit, One God in three, completely indivisible and of the same essence. And Jesus Christ, fully human and fully God – two natures, one person. The boundaries of our faith were carefully defined in the first 2 councils in 325 and 381 which gave us the Creed; which we repeat before we receive communion at every liturgy, and we affirm during our baptism service. The Nicene/Constantinople Creed is our “statement of faith” the fundamental statement defining and setting the borders of our faith.

For about 300 yrs. the “filioque” addition showed up in various Western places, but in 1024, the bishop of Rome, Pope Benedict 8th finally agreed to add the three words “and the Son” – the “filioque” in Latin, and in 1054 Pope Leo insisted on its use in Constantinople and this resulted in the severance of the Eastern church from Rome. The other 4 of the 5 existing Patriarchates, Jerusalem, Antioch, Alexandria, and Constantinople all refused to grant the bishop of Rome the authority to unilaterally change the ancient Creed which had been accepted as unchangeable and inviolate by the entire Church, including many Popes of Rome for more than 600 years. The theology of the Holy Trinity, the equality of every bishop, and the changeless nature of what had been believed always, by everyone, everywhere were radically changed when the bishop of Rome agreed to the addition of these three words. Top-down authority from the Pope was established in Rome, and from that time on, many additions to the faith which were foreign to the understanding of the Church for the first 1000 years or more of her history, and are still foreign to the Orthodox Church, were put in place by the bishop of Rome. Purgatory, indulgences, papal infallibility, the wrathful God, priests forbidden to marry, unleavened bread for communion, the immaculate conception…all were added by the Roman church after the split.  Decision making by the conciliarity and equality of bishops remained in place in the Eastern Orthodox Church, and the 7 ecumenical councils, the last one being held in 787 over the veneration of icon’s, continue to define the beliefs of the Orthodox Church to this day.

We celebrate today, the hundreds of bishops from all parts of the church who met at in these first 6 ecumenical councils and agreed on the boundaries of the faith, ruling upon the heresies being presented in their times. They followed the concilliar method begun at the first council in the book of Acts, when the Apostles and first generation Church met in Jerusalem to determine how we non-Jewish gentiles should be brought into the church. James, the brother of the Lord and bishop of Jerusalem, in rendering the decision of the council said at that time (Acts 15:28) “For it seemed good to the Holy Spirit, and to us, to lay upon you no greater burden than these necessary things.” The “us” were Sts. Peter, Paul and the other apostles, and all the Church leaders at this council in Jerusalem, who all consented to the decision and supported St. James, who was in charge as the bishop of Jerusalem, as he gave the final ruling. From this grew the conciliar nature of decision making by the bishops and leaders of the Church; meeting and seeking the guidance of the Holy Spirit in council.

These venerable fathers, in defining the essentials of our faith threw out many heresies such as:

Arianism – Christ isn’t really fully God but rather a created being;

Nestorianism – Christ’s mother can’t be called the Theotokos – Mother of God – as she only gave birth to Christ the human, who was separate from Christ God.

Monophysitism – Christ has only one nature – the divine nature which absorbs His human nature, so He is not fully human.

Dualism – Spiritual things are pure and superior to material things, which are contaminated. Spirit – good; matter – bad. The Church however confesses God created all things both visible and invisible good, and strongly rejects dualism.

Many of these heresies are still alive and kicking today. Dualism is subtly and sometimes not so subtly, prevalent all throughout the new age movement and in other religions such as Buddhism, scientology…Origen’s teaching of pre-existing souls and other wildly speculative ideas are also popular. The Jehovah Witnesses are classic Arians; Mormon’s Gnostics; Paganism and Hinduism are full of more god’s arguing amongst themselves than you can shake a stick at, and on and on.

A quick short list of these first 6 ecumenical councils goes:

1st council:  325 Nicaea; 318 fathers. Refuted the Arian heresy of Christ being not fully Divine, claimed he was a creature begotten in time. Wrote the first part of the Creed, “I believe in one God…” set the boundaries of the faith. Set the method for establishing the date of Pascha/Easter,

2nd council 381: Constantinople; 150 fathers. Refuted the heresy of Macedonius against the Holy Spirit not being one of the Holy Trinity but a creature connected to Christ, refuted Apollinaris saying that there was no human soul or mind in Christ. Wrote the second half of the Creed “And in the Holy Spirit..” Placed Constantinople as 2nd in honour of the 5 Patriarchates – after Rome.

3rd council: 431, Ephesus; 200 fathers. Refuted the Nestorian heresy against the Mother of God that she never gave birth to God but only to the human Christ. Conflict between Cyril of Alexandria and Nestorius of Constantinople over two natures verses one nature of Christ began.

4th Council: 451, Chalcedon; 530 fathers. Refuted the Monophysite heresy that Christ had one nature. Established the “Two natures in one person/hypostasis.” Fully God Fully Man. Both Monophysitism- overstressing the Divine over the human and Nestorianism stressing the human over the Divine were condemned. Oriental church split over misunderstood language as 1990 agreed joint statement between the Coptic and Eastern Orthodox Church determined.

6th Council: 581, Constantinople; 170 fathers. Firmed up that Christ has two natures/one person, the Chalcedon formula by adding 2 natures, 2 wills (one for each nature) one person. Put further clarity into the difference between Orthodox and Monothelitism and further united Eastern and Western Patriarchs. Anathematized Pope Honourus 1 of Rome for promoting Monothelitism. We can be very grateful and thank God for giving us our esteemed ecumenical council fathers whom we venerate today. They battled head on against the heretics that would distort who Christ is. Unless we are clear on who Christ is, we are promoting another gospel, worshiping a false god. They went to great lengths to defend that which had been believed from the very beginning and has been carefully and fully passed down through every generation of the Church. We don’t have to struggle and debate these issues; they have been thoroughly and carefully defined by the Church. What a great relief, what a huge burden removed, we don’t have to figure these things out over and over, just rest in the wisdom of the fathers and the Church. Peace be with you all.