Sunday of the Publican and the Pharisee 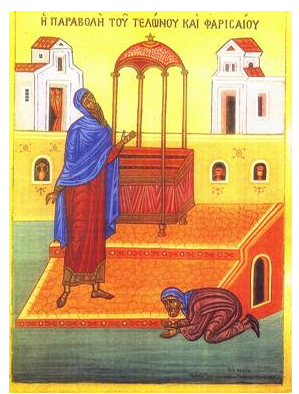 Today is the beginning of the Lenten Triodion.

Variables will be provided for those who wish to read the Typika at home.

We may be serving a Divine Liturgy if Public Health Orders allow.

Two men went to the Temple to pray. One was a Pharisee who scrupulously observed the requirements of religion: he prayed, fasted, and contributed money to the Temple. These are very good things, and should be imitated by anyone who loves God. We who may not fulfill these requirements as well as the Pharisee did should not feel entitled to criticize him for being faithful. His sin was in looking down on the Publican and feeling justified because of his external religious observances.The second man was a Publican, a tax-collector who was despised by the people. He, however, displayed humility, and this humility justified him before God (Luke 18:14).The lesson to be learned is that we possess neither the Pharisee’s religious piety, nor the Publican’s repentance, through which we can be saved. We are called to see ourselves as we really are in the light of Christ’s teaching, asking Him to be merciful to us, deliver us from sin, and to lead us on the path of salvation. (taken from oca.org)
+ Google Calendar+ iCal Export