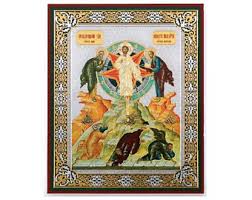 Today we celebrate a great feast of the Church, Holy Transfiguration. The reading starts with “Now after 6 days…” Six days after what?  In Luke’s Transfiguration story we hear “Now it came to pass, about 8 days after these sayings…” The sayings being referring to come in the verse before the Transfiguration in all three synoptic gospels, “Assuredly I say to you there are some standing here who shall not taste death till they see: (Matt 16:28) -“the Son of Man coming in His kingdom”; (Mark:9:1)- “the kingdom of God present with power”; Luke 9:27) – “the kingdom of God.”

St. Gregory Palamas explains that Luke is referring to the “eighth day” which always refers to the eternal day of the everlasting kingdom of God – which follows the 6 days of creation, and the 7th day of rest recorded in the creation story in Genesis. So, we are witnessing here a manifestation of the kingdom of God come to earth. Christ is revealing in His transfiguration His full divinity, allowing the uncreated divine energy of His Godly nature to shine through the fullness of His humanity which surrounds and keeps His Godly nature hidden from the apostles. Christ is allowing the spiritual eyes of Peter, James and John to be opened to see true reality. It is not a change in His nature that is being revealed, but simply the opening of the apostle’s spiritual eyes, to directly encounter the reality of the kingdom of heaven – which is always everywhere present and fills all things. All of creation is filled with God, and exists because of the undergirding energies of God. This is clearly revealed at the Transfiguration.

Moses is present, representing the law and those who have died, and Elijah representing the prophets and those who are living (remember Elijah never died but disappeared in a flaming chariot leaving his disciple prophet Elisha behind). In Luke we hear they are discussing Christ’s coming voluntary crucifixion in Jerusalem. The central event in all of history! The Church in her wisdom has given us the feast of the Holy Cross, which seals and completes the glory we see here today at the Transfiguration, exactly 40 days from now on Sept. 14. Forty is always the number of completion. Christ’s 40 days in the wilderness, Israel’s 40 years in the desert, Christ appeared on earth after His passion for 40 days until He ascended… We see the manifestation of the reality of the Transfiguration completed at the cross and resurrection of Christ.

Theosis is the process of having our spiritual eyes opened to prepare to live in the kingdom of God. When we fall asleep and rest in the cemetery – the “sleeping place” – our eyes will be opened to true reality. The purpose of this short little journey we are on here on planet earth is to become familiar with the kingdom of God. That we may awaken at our death and recognize our true home, with our true family, the saints of the Church. In Revelations (22:5) St. John tells us of the kingdom, “There shall be no night there: They need no lamp nor light of the sun, for the Lord God gives them light…” This feast of Transfiguration is giving us a glimpse of this reality.

The ineffable light which proceeds from Christ fills all things, “He was transfigured before them. His face shone as the sun, and His clothes became as white as the light.” This light with no variation or shadow transfuses all reality. The gold surrounding our icons depicts this transfigured reality. All the saints in the icons are filled with this light of Christ flowing through and permeating them. They are painted as transfigured in the kingdom with the full light of Christ. Every time we venerate an icon, the veneration goes through the saint, through to the transfigured and ever-present reality of the light of Christ’s divinity in the saint, through to Christ Himself. There is a beautifully descriptive passage written in the 14th century by Saint Nicolas Cabasilas, in his commentary on the Divine Liturgy which describes this reality.

“So, when the priest says; ‘The Holy things for the Holy’, the faithful reply; ‘One is Holy, One is the Lord Jesus Christ, to the glory of God the Father Amen.’ For no one has holiness of himself; it is not the consequence of human virtue, but comes to all from Him and through Him. It is as if we were to place mirrors beneath the sun; each would shine, and send forth rays of light, so that one would think there were many suns; yet in truth there is but one sun which shines in all; just so Christ, the only Holy One, pours Himself forth upon the faithful, shines in so many souls, and gives light to so many saints; yet He alone is holy, in the glory of the Father..”

How did the 3 great apostles react to this great revelation of the Transfiguration? We sing in the Troparion of the feast “Revealing your glory to Your disciples as far as they could bear it.” They had been travelling with Christ now for almost 3 years, seeing him do countless miracles, feed the hungry with almost nothing, calm the storms…How well could they bear it? The scripture tells us “…they fell on their faces and were greatly afraid.” This is a typical reaction upon encountering the true reality of God, where there can be no falsehood or delusion, nor can anything exist but truth and love. In Isaiah (6:5) we hear him say, “Woe is me because I am pierced to the heart, for being a man and having unclean lips, I dwell in the midst of a people with unclean lips; for I saw the King. The Lord of hosts with my eyes.”