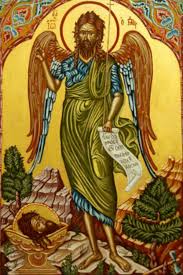 Today we have another wonderful feast day falling on a Sunday. The “Beheading of the Holy Glorious Prophet Forerunner and Baptist John” is always commemorated on Aug. 29 and so once again like a couple weeks ago with the Dormition, we find this feast day commemoration falling on a Sunday this year. It is a marvelous lining up of our regular weekly cycle with our annual cycle of the saints. This allows those who only come to church on Sunday’s to be blessed with the glory of a major feast day. Of course, the best way to ensure this great blessing is ours, is to simply note when the feast days are coming around in the next year, and try to take time off to celebrate at least a few of them. This is a time-tested way to enter into the deeper experience of the Orthodox Church as demonstrated in the lives of thousands of saints in every century. We have some good opportunities coming up to begin this practice with our St. Aidan’s feast day this Tuesday, the Nativity of the Theotokos: Sep. 8, and the Elevation of the Cross: Sept. 14!

St. John the Baptist is a most remarkable saint, and one whom we seldom take the time to truly appreciate. He is positioned on the Orthodox iconostasis directly on Christ’s left hand, second in honour only to the Theotokos who is positioned on Christ’s right hand. Why such an honoured position? Well first, as we sang over and over at Vespers last night, “But let us bless the Baptist, as is his due. And honour him as the greatest born of a women!” Who says he is the greatest born of a women? Christ Himself said, “Assuredly I say to you, among those born of a women there has not risen one greater than John the Baptist:…” That’s quite a statement. We have Father Abraham, the father of the Jewish people and his son Isaac and Jacob/Israel to whom God said to each one, (Gen: 26:4) (Gen. 28:14) “And I will make your seed multiply as the stars of heaven…and in your seed all the nations of the earth shall be blessed.” We have Enoch who so pleased God that he was taken bodily up from the earth and translated, Moses who led Israel out of Egypt and constantly talked directly with God. Elijah who was taken up to heaven in a fiery chariot and never died. David a man after God’s own heart…And yet it is St. John the Forerunner whom Christ calls the greatest.

All of the Prophets pointed to Christ, but as it were darkly in a mirror, shrouded in a veil. The prophecies we hear spoken of Abraham, Isaac, and Jacob, “in you all the tribes of the earth shall be blessed…” what is this blessing other than they are the start of a lineage that will eventually lead to the central event of all history, the birth of Christ, fully God/fully man, and our only hope of salvation. But John the “Forerunner” prepared the way for Christ directly. He was blessed to reveal to the world, Him whom all the prophets before Him had said would come, He who would be our only hope and salvation. St. John prepares the way of the Lord and directly introduces Him to the world, “Here He Is!” (John 1:29) “…Behold! The lamb of God who takes away the sins of the world!” What a complete description of the Gospel. So we see that he is the prophet of prophets, clearly revealing the fullness of the mystery of all eternity, Christ, born as a human among us, come to defeat our enemies – death and the devil, and bring us into His family!

St. John is also the first of the Apostles, the first of the Martyrs preceding in proclaiming the fullness of the Gospel. He is truly the first to recognize Christ’s presence on earth (apart from Christ’s mother) as within the first week of Christ’s conception, when the blessed Virgin Mary goes to visit Elizabeth, when St. John is at the 6 month in the womb stage of his life, he recognizes Christ and leaps for joy in his mothers womb!

He is the first apostle, and he sends his own disciple, Peter’s brother Andrew the first-called off to follow Christ, and to fetch his brother Peter saying, (John 1: 36) “Behold the Lamb of God.” Here he is demonstrating his understanding that (John 3:30) “He must increase but I must decrease” and (John 1:15) “…He who comes after me is preferred before me, for He was before me.”  St. John is the first of all those who will come, preaching the Gospel. He is proclaiming to all as he awaits the coming of Christ, (Matt. 3:2) “Repent for the Kingdom of heaven is at hand.” The same first recorded words used by Christ as He begins His own ministry in the gospel of Matthew, after the 40-day trial of testing in the desert by the devil? (Matt.4:17)

St. John is the Forerunner, the first of all the thousands of Martyrs for Christ, before St. Stephen called the proto martyr, and all the rest. All four of the gospel accounts go into detail revealing that when the fullness of time came to reveal Christ, it was directly preceded by the most glorious forerunner and Baptist John, as the first to reveal Christ and announce His arrival to the world. He is truly the most blessed of all who have been born of a women. He is truly an angel in his single-minded focus and ascetic life in the kingdom of God. We see this represented in many of his icons where he is the only saint that we find depicted with angel wings attached to his human person. These wings are not to be taken literally of course, but represent the unique purity of purpose and being in St. John the Baptist.

Today we are horrified at the great unspeakable evil found in Herod. Outdoing even his father, who had slaughtered the holy innocents under 2 years old attempting to murder Christ as a child, and forcing the Noble Joseph and Christ’s most pure mother the Virgin Mary to flee to Egypt to protect Him. Today we hear how in a fit of lust and foolish pride Herod murders St. John the Baptist. It is reminiscent of the great grief of great and Holy Friday when we are with Christ as He voluntarily ascends the cross for our sake. For today as the Holy Prophet and Forerunner and Baptist John joyfully lays he head beneath the slaughtering sword, it is for a similar journey as that which Christ will take in another few years. As his head is being served to the depraved Herodias on a platter, his soul goes into Hades, the realm of the dead, where all those departed their worldly journey had found death. Once he arrives, St. John announces to all “Christ is coming! Prepare the way of the Lord! Rejoice, for the Creator of all is coming to redeem His precious children.” Sin has resulted in death for the entire world, for no man has lived and yet not sinned, and all who have departed, await He who Moses, Abraham, Elijah and all the holy prophets and righteous ones have been awaiting. Christ God is on the very threshold! He will arrive here in Hades shining with ineffable light and power and release all the prisoners who will follow Him. For St. John is not only the forerunner, evangelist, martyr, and revealer of Christ to us, the living here on earth, but has joyfully found death that he might do the same for Adam and Eve and all the race of men held captive through death and sin and the devil in Hades. Death is soon to be defeated, and life granted to all who rejoice through Christ!

So today we see a great sorrow that leads to a boundless joy, as St. John the Forerunner – the greatest of those born among women – enters into Hades, the very headquarters and stronghold of Satan, the land of death and darkness, dust and ashes. Entering Hades, St. John the Forerunner preaches to all who will receive, the glorious truth of Christ’s redeeming love and coming victory over death. And at the glorious Pascha when Christ Himself enters Hades confronting sin, death, and the devil, binding them and destroying their power, the great and holy forerunner and Baptist John was at the front of the line welcoming Christ and rejoicing in the victory of all eternity. He is now in the highest heavens, directly at the left-hand side of Christ, with the most holy Lady Theotokos at Christ’s right-hand side. He is constantly attuned to hear our prayers and help us in all we ask for our salvation. St. John the Forerunner and first evangelist, martyr, and true servant of Christ, pray for us sinners!